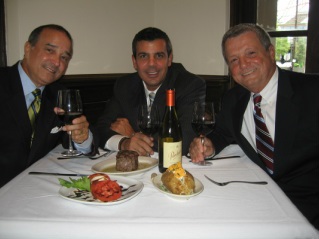 John Santopadre opened Mr. John’s Steakhouse in 2006.  He was an outstanding operator of many restaurants around town over the years, including Smilie’s and Cafe Giovanni.
Mr. Santopadre passed away in 2007 but before his passing the restaurant was sold to Santopadre’s son-in-law, Rodney Salvaggio, who ran Smilie’s for most of its history; Desi Vega, an alumnus of Commander’s Palace, Ruth’s Chris and Emeril’s; and Paul Varisco of The Milestones.

Desi, Paul and Rodney wanted to continue Mr. John’s passion for serving the highest quality steaks available. They bring a combined restaurant experience of over 50 years.

Paul Varisco has a love for food and been in the restaurant supply business for the last 12 years. It was he who brought the partners together to continue Mr. John’s name.

Desi Vega, the managing partner, grew up in the restaurant business and was “groomed” by Miss Ella Brennan at Commander’s Palace, Miss Ruth Fertel of Ruth’s Chris Steakhouse, and most recently by Emeril Lagasse. His attention to detail and commitment to excellence makes for a truly memorable dining experience. Desi knows what it takes for Mr. John’s to be the top steakhouse in New Orleans and one of the top steakhouses in the nation and has done so with superior food and service.